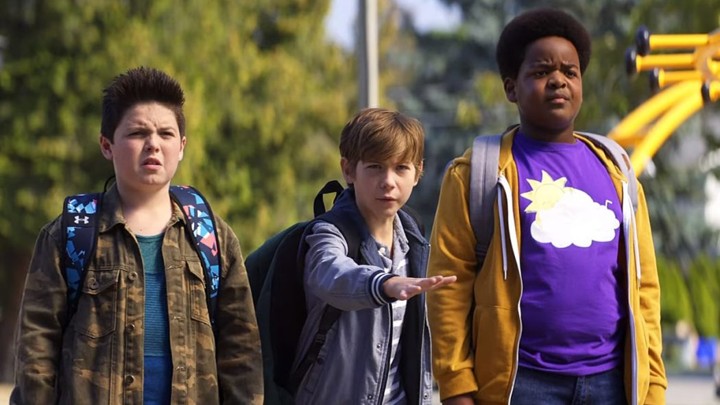 “Good Boys” directed by Gene Stupnitsky, is exactly what you get when you take “Superbad” and replace the characters with sixth-graders.

Max, Thor, and Lucas played by Jacob Tremblay, Keith L. Williams, and Brady Noon – charmingly refer to themselves, the “bean bag boys” and have been invited to their first “kissing party”. This is Max’s (Jacob Tremblay) one and only chance to kiss the girl he absolutely plans on marrying (oh young, awkward, stupid, love). To get to the party they must first replace Max’s father’s very expensive drone, which was stolen (sort of) by the neighbors. An adventure filled with drugs, sex dolls, and malicious frat bros ensues.

And we’re a bit worse off for it.

I’m not around many children in my day-to-day life and it’s been a long time since I was in the sixth-grade, but these kids looked more like 6 than 12 to me. Or do kids just look really young these days? Maybe.

I will say the movie had many funny moments. I was wondering how the writers would pull off raunchy humor to the tune of “Superbad” all while centering the story around literal children, but they managed pretty well. Jacob Tremblay has the most angelic face I have ever seen in my life, so him using four letter words added another layer of humor. You could definitely tell producers Seth Rogan and Evan Goldberg danced a fine line with how far to push the boundaries with these kid actors.

Anyway, Max and crew going all out to replace the drone dragged on to the point of it feeling more ridiculous than interesting. It was one of those Hollywood scenarios where the problem that drives the plot could easily be solved at any moment, if the characters just behaved in a way that real life people would. Of course, if this happened then we’d be watching a 15 minute film. Nonetheless the misadventures of the bean bag boys felt forced and silly. Also you definitely don’t fix a broken arm by just popping it back into place.

Even with the ridiculousness, this movie definitely had a pretty good highlight reel. For that reason I’d recommend watching if you’re in the mood for a chuckle or if you really liked “Superbad”.

The best parts of the story were the ones that highlighted moments we all can relate to. That slap of reality when you realize you and your friends are growing apart. The people you spend most of your time with won’t be the same ones you hang with in the coming years. And all of your friends would rather attend a “kissing party” than play with toys in your basement.

Growing up is hard to do.